Ok, so I had built an AllStar Link node before (two actually, see some previous posts here) and I was feeling all great about myself and stuff.  I proposed to the club that we purchase a Raspberry Pi 3, a RIM Lite interface and with these things, we could build a new repeater controller for the 2 meter repeater.  Having had a fair amount of experience with a Raspberry Pi before, and some experience with a RIM Lite module, I thought to myself, “I got this!”

Well, not so much! 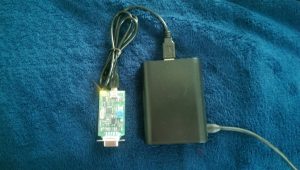 Doesn’t look like much, does it?  But it sure had me pulling out my very sparse hair over the weekend!

If you’re still reading along, I’ll try to BRIEFLY recount the issues I had and the lessons I learned.

Actually, I tried to do this first.  I thought before I got too involved, I should at least test the new Raspberry Pi 3 and make sure it wasn’t faulty in some way.  So I assembled the pieces; the Pi, the case, the power cube and the USB cable that connects the power cube to the Pi (minus the RIM Lite at this point).  Now get a micro SD card, and load some software on it, insert it into the Pi’s card slot, and let ‘er rip!  Simple, right?  Well….  the basic image downloaded from the Raspberry Pi distribution site didn’t seem to be very stable.  It would lock up and misbehave in all sorts of ways.  I found this very confusing because my prior experience with the software from that site has shown it to be nearly bulletproof!  So what could be wrong?  I tried a few different software images and found similar results:  no matter what I did, it seemed like I had a flaky Pi.  In addition, I couldn’t seem to get the on board WiFi adapter working at all.  Color me very confused at this point!

LESSON 2:  Quit gnashing your teeth and listen to the experiences of others!

Ok, so, in fear of grinding my teeth down to smaller nubs than they already are and rather than lose more hair than I already had, I decided to start searching for answers on the Internet.  (Who knows more than the Internet does?  PLEASE stop laughing now!!)  After a few hours of searching, I really didn’t find anything that I thought was specific to my particular issues.  But I did start to realize that there was a nagging underlying issue in what I was reading of other folks problems.  It seems that many of them were having power related issues, mostly due to the fact that the Pi 3 requires more power than the previous Pi’s in the series.  My first thought was, how could this be a problem for me?  Surely the supplier sent a power cube that is powerful enough to manage all that the Pi could require!  Didn’t they?  I mean, I can trust them, right?  Ummm.. well…. errr…  grrr!  So I decided to power the Pi from a powered USB hub that I have.  Surely it would put out enough power.  I plugged it all up with the Pi and the USB cable that came with the Pi, and still, no joy!  Still flaky, still unreliable, still confounded and now a little depressed.

And I think that at this point, God realized that I was probably going to either burst a blood vessel, or have a major meltdown, neither of which would be good for me, nor for Auntie M, so a new idea fluttered through my mind.  I’d already eliminated the power cube, and I was trying to ensure the board itself was good.  The only thing left to try to replace was the USB cable that had been sent in the package.  Feeling very skeptical that this could be the problem, I found another USB cable with the right connectors and pulled out the one they had sent in the package.  Shaking my head back and forth just knowing this couldn’t be the problem, I plugged it all up again, with the cable I had from before.  Plugged into my local Ethernet, I logged in and decided I’d do something that had always locked it up before.  I asked the on board WiFi to scan for all WiFi networks it could see.  When I saw that it actually had done it and returned this nice very verbose list of everything it could see, I nearly peed my pants.  (I’m sorry, I know that’s probably a visual you really didn’t need, but somehow it felt right while I was writing this.) So after I contained my joy, (and checked my pants), I tried a few other things and no matter what, I couldn’t make the little Pi 3 board fall over into a comatose state!

LESSON 3:  Try, if you can, to make smart choices about the software you are using!

Feeling bold now that I had figured out the instability issue, I once again said to myself, “Now, I’ve got this!”  (I know, in retrospect, I should have known I was headed for disaster again!)  There were several distribution images that have AllStar Link on top of Linux for the Raspberry Pi.  If that doesn’t sound complicated enough, there are different distributions with different versions of Asterisk (the software that AllStar Link is based upon), some of which are RPi 2 compatible and some of which are RPi 3 compatible.  Yep, you guessed it, I tried four of them before I found one that seemed to work and also supported the on board WiFi adapter on the Pi 3.  Then I realized that the one that worked, was based on a different distribution of Linux than the ones that are currently supported by AllStar Link (the organization!).  SMH!!!  Really?  Come on!!!  Sighhhh!!!!

Wouldn’t you think that it would be a LOT easier than this?  I sure did!  At this point I had spent most of a week getting to this point, and it was late on Saturday night, so I decided that before my brain melted down again, I should really get some sleep.

Sometimes, distance gives you insight!  This must actually be one of my most favorite lessons, because I seem to need to keep learning it over and over and over again!  Time and distance gave me enough insight to go look closely at the place where the DIAL distributions came from and when I did, voila!! There, buried on a low lying, nondescript technical page (actually the MAIN page), I found a link to a release candidate for the NEXT version of DIAL on Raspberry Pi!  WOW!  How did I miss this before?  (If you’ve been following along, you already know the answer to that!)  But this, THIS is exactly what I’m looking for!

Alright, so, download, write to memory card, install in Pi, reboot!  Viola, right?   I’m SURE you know by now what’s coming next!

LESSON 5:  You STILL don’t know all you think you know!

Alright, it comes up and everything LOOKS ok.  I start poking around and it connects to the Ethernet just fine.  But I know that where this is going to end up, we need it to connect on WiFi.  So I start, with my STILL limited Raspberry Pi 3 knowledge, poking at it to try to get it to connect seamlessly on WiFi.  I try this, and I try that, relying of course on my EXTENSIVE knowledge of Raspberry Pi’s…  Yep, you guessed it!  What I thought I knew worked before and should be easy, just isn’t working anything like that any more!

So back to the wonderful world of answers, the Internet!  Of course, there aren’t always DEFINITIVE answers… well maybe there are if you know the EXACT RIGHT THING TO ASK!  Of course, I didn’t, but after digging my way through a dozen or more likely and many more unlikely answers, I finally figure out that the NEW version of the Pi software requires a different way of making the networking stuff work right.  Well, DUH!  Yes, once again in retrospect, I should have realized that there was something amiss that I still needed to learn.  But would my ego get there right away?  Nooooooooooo!!

LESSON LAST:  Be thankful for all that you have learned!

So, now it’s Sunday evening.  I’ve spent nearly a full week, getting to the point where I have a reliable, functional AllStar Link node that we can use as our repeater controller.  I am thankful that I’ve gone through all that I have this week because I personally have several more of these controllers to build.  At least one more will likely be for the club’s 440 repeater, and there will be at least two more for repeater projects that will reside here in or around Owensville, MO.

Despite all my failings this week, I think it’s time I rewarded myself with a nice cold scotch, and some good food.  And as I speak here, the scotch is already cold, and I’ll be making tacos tonight because I LOVE tacos!

Despite all my raving in this post, I hope you will all go away with the knowledge that I LOVE TECHNOLOGY and the challenges that it brings!  Long live the Internet, and long live projects that can keep my attention and desire to succeed as well as this one has!

Thanks for reading along!  If you’ve made it this far, you are truly amazing! 😉