AllStarLink is EchoLink on Steroids! 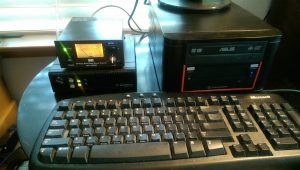 Ok, so a few posts ago, I lamented about how EchoLink was sorta boring.  And because I felt that way, I undertook a project to evolve my traditional Windows based EchoLink node to an AllStarLink node (with an EchoLink channel!)

Well, after a couple of weeks of learning AllStarLink, and sorting out a malfunctioning interface module, it’s finally up and running and by all accounts it sounds really great!  And before I go any further, I want to give my sincere thanks to Scott Zimmerman (N3XCC) of Repeater-Builder fame who built and supplied the modules I used and for his help in sorting out the bad module.  Scott is a great guy and a stand-up businessman and I would highly recommend his products!  I used the  (correction: I used the RB_RIM_Maxtrac interface! Thanks Scott!) version of his line which can be found at http://www.repeater-builder.com/products/usb-rim-lite.html .  This module has a 16 pin connector that plugs directly onto the back of the Motorola Maxtrac radio that I was using for the EchoLink node.  A picture of this module can be seen on the left below and as the lower left image and the middle image of the 5 images at the top of Scott’s product page.

The module provides a nice, compact audio and control interface to the computer in a single USB connection.  I used the most recent DIAL image for installing AllStarLink on the computer, and was actually up and running fairly quickly (if you take out the time we spent sorting out the bad module.)

I’m really quite amazed at the flexibility and programmable control one can have using the AllStarLink system.  It’s designed to be a full fledged repeater controller and repeater linking system.  The default audio quality AllStarLink uses is quite a bit better than I imagined.  Even the EchoLink connections sound better to me than they did before!  As a bonus, the streaming audio feed for the repeater to which the radio is tuned now originates directly out of the AllStarLink node.  The quality improvement of this alone made the entire project worthwhile!

I invite you to check out the node if you like!  On AllStarLink it is node number 43758 and on EchoLink it is still  node N0NOE-R (407714.)  The radio is tuned to the input and output frequencies of the Sullivan Amateur Radio Club 2 meter repeater which is located in West Sullivan, MO and is on 146.805 Mhz.

4 Comments on “AllStarLink is EchoLink on Steroids!”