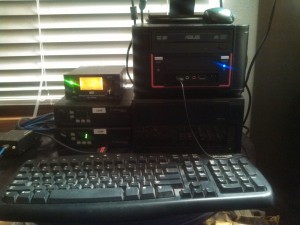 Never one to leave well enough alone, I have undertaken the build of version 3 of the N0NOE-R EchoLink machine.

The goal of this rebuild is two fold:

1.) Convert the machine into a full fledged cross band repeater with EchoLink capability.

2.) Use the new platform for providing wider coverage and additional services to the club and the community in general.

To accomplish this we will replace the computer with a different one that will be running Debian Linux v8, and the SvxLink package.  SvxLink will provide the core controller logic for the cross band repeater and will also implement the EchoLink functionality.  Can you say “So long Windows 7 and the windows based EchoLink software”?

I admit, this is somewhat outside my comfort zone as I have most always been a Windows oriented consultant.  I don’t think my MCSE certification is going to help me much here!  I’ve played with Linux in various flavors before, but never committed anything to it that would become a “production” system.  Hope I haven’t bitten off more than I can chew! 😀

It will be a bit of a challenge as I prefer to disrupt the existing EchoLink box as little as possible.  The new machine will reuse the existing 2 meter radio, it’s digital interface and the existing power supply.  My intention is to put the new machine in place first with the existing radio being used and get the EchoLink function up and running again asap.  Once that’s sorted out, we’ll begin to add other features like the 440 radio, cross band repeat functions, etc.

As you can see in the picture above, I’ve started to put the necessary pieces in place.  On the new computer, I’ve installed Debian 8, installed all the prerequisites for SvxLink, and downloaded and compiled the current master source distribution of SvxLink.  In addition, I’ve taken a Raspberry Pi and loaded the current Raspbian operating system onto it, and downloaded and built SvxLink on it.  You may ask why I’m doing that.  Well, one of the things I’m looking to test in the near term future is the ability to add inexpensive remote receivers and transceivers to the repeater system linking them to the main machine through the internet.  SvxLink will give us this capability, thus the choice to use it in this iteration.  To make secure connections through the internet, we will use OpenVPN on both the base computer and all the remotes.  To this end, I’ve installed and configured OpenVPN on the main server machine and tested it with a couple of different laptop computers as clients.

We’re only a few steps down the line, but at least the project is moving.  My goal is to have the new machine in place and running the EchoLink within a couple of weeks.  The additional functions and features will be phased in over time as the required resources become available.

For anyone who might be interested in the capabilities of SvxLink, here’s a place to find out more about it: